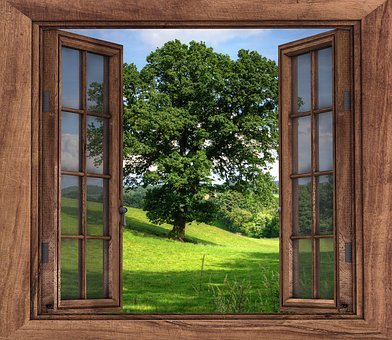 WindowSwap is a website where users submit ten-minute clips of their view from wherever they are in the world. It grew in popularity in the middle of the pandemic, a way for would-be travelers to see the world beyond their immediate surroundings.

It’s a profound way of inspiring sonder, the sense that everyone else in the world has a life as complex as your own.

For me, it’s incredible to imagine just how many people there are in the world.

Turning this into a story: what if humans could travel between these windows in an instant?

It reminds me of Hyperion by Dan Simmons. Specifically, the story about Brawne Lamia. In it, there’s a technology called farcasting. In essence, portals allow for instant transport across vast distances.

A vital part of the story and why the technology was never explained is that farcasting was given to humanity by artificial intelligences.

Since the technology is so far-fetched, any story I write would have to include a gift of the technology or make the technology so commonplace that no one bothers explaining it. Think about cars. Nobody bothers describing how they work; they’re just taken as a common occurrence.

The story would be about a private investigator who takes a case from a classic damsel in distress. The woman’s husband has gone missing. The investigator discovers he had made frequent trips to a small town. The further inquiry leads to the discovery that the town has its own mystery: the murder of a prominent community member.

The husband ends up being dead, murdered by the local after discovering the community member’s attempt at buying the entire town. Eventually, the story comes out that the local was murdered because of infidelity, having nothing to do with the husband in the first place.

Further books in the series could take inspiration from Sherlock Holmes, mixing in the instant transport during key chase scenes. Clues could include Carmen San Diego style artifacts, with the investigator traveling worldwide in the hunt for the criminal.