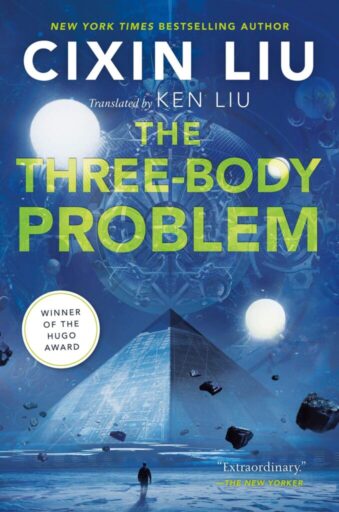 Netflix is making an adaptation of Liu Cixin’s The Three-Body Problem. Their newest problem: the attempted murder of one of the show’s producers.

Authorities in Shanghai have a suspect in custody, one of the producer’s associates. They’re chalking it up to a professional dispute.

The Three-Body Problem is the first book in the Remembrance of Earth’s Past Trilogy (read it if you haven’t; it’s fantastic). It tells the story of an alien invasion from a nearby star system.

Turning this into a story: the author of a book written about an alien race among us is mysteriously murdered when his book is released. Available only in digital at first, the book gains fame because of the untimely death, then is turned into a movie, and executives creating the film are murdered one by one.

It’s a murder-mystery story, with aliens.

The detective has to figure out if the aliens are responsible for the murders; are they attempting to limit the knowledge of their existence?

Potential aliens could be those who can take on a human form or exist in another dimension alongside us. One interesting concept would be if they live in another time but can travel through the fourth dimension just like we travel in our 3-dimensional world.

Similar to “The Ring,” but instead of consuming the information leading to death, the driver is attempted propagation of the knowledge.

Part of the story could involve the detective investigating both the murders and the presence of aliens in the first place.

The opponents are the potential suspects: rival movie studios and fellow sci-fi authors. The battle occurs when they are arrested, but the detective’s work in finding out about the aliens leads to a revelation at the end of the book: the aliens are real, and they’re walking among us.

The second book in the series dives into the alien threat and what the detective does with the knowledge. He becomes the murder target. All attempts are carried out by humans, so the aliens can maintain their secret.

In the third book, a child is found who can identify the aliens. The aliens turn their target on the kid, and the detective takes steps to keep him alive.

Future books could be about the detective and child fighting back against the aliens, who have infected every aspect of human life. One story could be about an alien who wants to expose his true identity to the world, and the pair have to save them from their fellow aliens.

The great thing about this story? The initial book about the aliens, their world’s mechanisms, and how they came to Earth in the first place is already written and wouldn’t require an in-depth explanation.